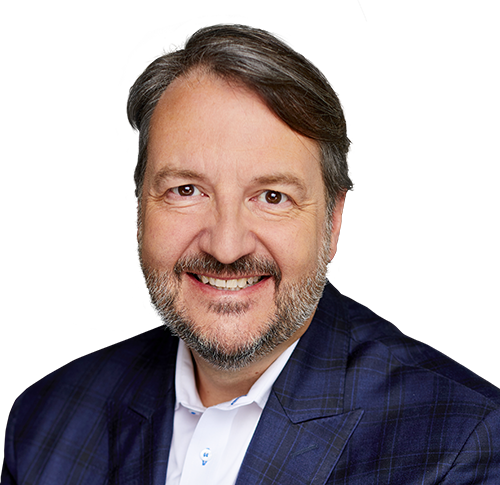 As Senior Vice-President, Market Expansion and Development at Videotron since August 2021, Pierre Bonin is in charge of executing on the organization's growth plans outside Québec.

Pierre joined Videotron in 2014 as Chief Information Officer. He was responsible for leading the 700-strong IT team and maximizing the use of the technologies needed to achieve business objectives. With his extensive experience in telecommunications and business, he was instrumental in the creation and implementation of our 100% digital brand Fizz and initiated a number of digitalization projects.

In August 2021, he was appointed Senior Vice-President, Market Expansion and Development and given responsibility for leading the company's growth initiatives outside Québec. In this capacity, Pierre coordinates the teams that are defining optimal prospecting and roll-out strategies to enable the company to achieve its ambition of stimulating healthy telecom competition outside Quebec. He is a leader with deep experience in mergers and acquisitions, regulatory affairs, and negotiating mobile virtual network operator (MVNO) agreements for Microcell (Fido) who is well equipped to lead Videotron’s growth strategy outside Québec.

Pierre holds an MBA from HEC Montréal, a bachelor’s degree in computer science from Université de Sherbrooke and ASC certification (certified corporate director). He has made his mark in the IT and telecom industries in the course of more than 30 years. Prior to joining Videotron, he held a number of key positions in which he carried out large-scale national projects.